Thorough browning gives cauliflower an intense, lively flavor—with no need to resort to adding butter, cream or other common allergens. To get it to cook through, you need to cut it into small enough pieces.

Cut the cauliflower up into very small florets.  Heat the olive oil with 1/2 tsp. salt to medium heat in a very wide skillet. Add the cauliflower and stir it around so that all the pieces are coated with the oil.  Cook for several minutes, stirring very frequently, until the cauliflower pieces turn golden brown and become somewhat tender.  Add the garlic and cook for one more minute, stirring constantly.  Remove from heat. Adjust salt and stir in the parsley or dill.
Posted by Allergen-Free Chef at 2:38 PM No comments:

Email ThisBlogThis!Share to TwitterShare to FacebookShare to Pinterest
Labels: Vegetables

Spicy Marinade Without the Usual Allergens


This very simple marinade is intense, tasty, and just a bit hot.


Crack open the heads of garlic and remove the hard stem bits (your juicer won't like them). There is no need to peel the individual garlic cloves. Put the garlic cloves through a juicer, followed by the half onion.  Stir in the remaining ingredients. The raw marinade will have an odd, slimy consistency. Don't worry about this effect: it will go away as soon as the meat starts to cook.  Marinate overnight. 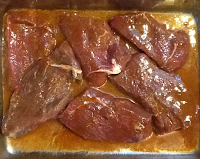 Posted by Allergen-Free Chef at 1:45 PM No comments:

Email ThisBlogThis!Share to TwitterShare to FacebookShare to Pinterest
Labels: Marinades


Carrot soup usually contains some amount of whipping cream and/or sour cream. These are delicious additions, and I highly recommend them as condiments (i.e. available on the table for folks with no allergy to dairy, not in the soup). Freshly squeezed lemon juice is an excellent alternative condiment, and chopped parsley leaves are a great garnish because they add just the right herbal note to the soup.
Carrots are a starchy vegetable: this soup is thick and creamy without the addition of flour or any other starch. 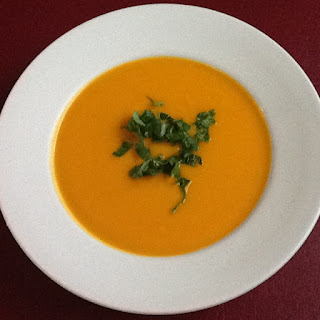 Gently saute the onion in the oil with a good sprinkle of salt; do not brown. When the onion is soft and translucent, add the garlic and cook for another minute or so, until the garlic is softened up but not browned. Add the ginger, chicken stock and carrots; bring to a boil; reduce to a simmer and cook until the carrots are thoroughly soft. Puree thoroughly, in batches, in a blender. Adjust salt. Garnish with parsley if you like.
Posted by Allergen-Free Chef at 10:25 PM No comments:

Email ThisBlogThis!Share to TwitterShare to FacebookShare to Pinterest
Labels: Soups

The distinctive flavor of caramel comes from cooking sugar at a high temperature. Unfortunately, both cane sugar and beet sugar consist of sucrose, which has a nasty tendency to recrystallize while you're cooking it  If any bit of the sugar turns back into crystals, the rest quickly follows suit, leaving you with a mess that probably can't be salvaged. The addition of even a small amount of syrup made up of certain other sugars can prevent this.  Corn syrup is basically glucose and works like a charm, which is why practically everything "caramel" has corn syrup in it. Rice syrup has a couple of other sugars (no sucrose) and works fine too. Rice syrup has a pleasant flavor of its own, one I think actually adds a deep, rich note to the taste of caramel. Note that some rice syrup is not gluten-free, as the processing involves enzymes which may have been derived from barley. Watch for gluten-free syrup if this is an issue.

Put the coconut milk and salt in a small saucepan. This is your chance to add other flavors without including corn alcohol from extracts. Put in a cinnamon stick, or slice a vanilla bean lengthwise and toss it in. Experiment with other flavorings if you like (chipotle, cloves, whatever). Heat to boiling and turn down to a simmer.


In a medium saucepan, heat the sugar, rice syrup and water on medium high heat, stirring just until the sugar is completely dissolved. The mixture will then foam, bubble and, after a few minutes, start to turn darker.  When it turns the right shade of golden brown, take it off the heat. Pluck any vanilla bean or cinnamon stick out of the coconut milk mixture, and immediately whisk the coconut milk into the syrup.  Stir in the palm oil until it is really, thoroughly blended in (otherwise you will have lumps in your caramel sauce).  Refrigerate.

*Note that some rice syrup is not gluten-free, as the processing involves enzymes which may have been derived from barley. Watch for gluten-free syrup if this is an issue.
Posted by Allergen-Free Chef at 5:47 PM No comments: