Apple Butter: a sweet treat with no allergens—just apples, sugar and spices 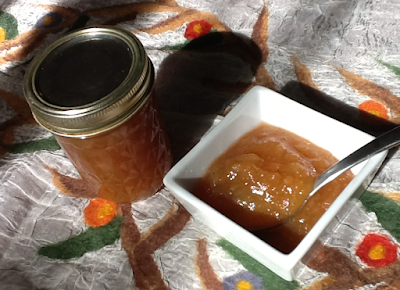 One problem with commercial jams and jellies is that the fruit that they were made from may have had time to sit around growing mold or yeast. If you're allergic to mold or yeast, you can take care of this problem by making your own jam or jelly from fruit that you have inspected.  Note that thin-skinned sweet fruit (such as cherries and grapes) is normally coated with a layer of yeast: use fruit you can peel, such as apples or peaches).

The simplest way to completely avoid corn in your fruit spread is to make apple butter using cane or beet sugar and peeled apples: peeling removes any waxy coating containing soy, corn or dairy that was put on the apples, and a good long simmer reduces the water content of the apples, concentrating their pectin (apples contain more pectin than most fruit).

Combine all ingredients in a pot. Bring to a boil, and simmer uncovered, stirring occasionally, until about half of the applesauce has boiled off. This will take 3 hours or so.  To tell whether your apple butter has reached the right consistency yet, put a dab of it on a plate and leave the plate in the fridge for a couple of minutes.  If it is solid enough, it's done.

This recipe makes 9 or so cups of apple butter. Can it following the instructions at a reputable site such as this one.
Posted by Allergen-Free Chef at 12:23 PM No comments:

Email ThisBlogThis!Share to TwitterShare to FacebookShare to Pinterest
Labels: Condiments

Most American breakfast foods are made of eggs, dairy products and/or wheat; many also contain corn, soy and other allergens. Two excellent breakfast foods that don't, in principle, need to contain any of the usual allergens are corned beef hash and roast beef hash. The canned versions, of course, often contain corn, soy, or other allergens. If you make your own hash, not only can you easily leave out all the nitrites, flavorings made of unspecified ingredients, oils you are allergic to and other questionable ingredients, you can also cook the potatoes separately from the other, wetter ingredients. This allows you to get them really crispy, which adds a nice crunch to the hash.

In canned hash, the ingredients have been chopped (or ground) really, really small; this is not something you need to replicate in home cooking.  Big chunks of meat and potatoes don't really constitute hash either, though. I recommend cutting the main ingredients into ~1/3 inch cubes.

Cut up the meat and put it aside. Peel and cube the potatoes and put them aside also.

Chop the onion and any other veggie you would like to add (pepper or celery, for example). Heat  a smidge of oil (2 Tb. or so for an average-sized onion)  in a skillet.  Add the onion and other veggies, if any, sprinkle with salt, and reduce heat to low medium.  Saute gently until the onion is soft and translucent, stirring occasionally.

At about this point, add the meat to the veggies and let them gently heat back up together, stirring occasionally.
When the bit of potato in the pot sizzles and starts to brown, dredge it out and add the rest of the potato. When the potato turns crisp and golden brown, dredge it out with a slotted spoon and place it on a plate covered with paper towels. Sprinkle it with salt and stir it into the meat/onion mixture.  Adjust salt to taste. Serve immediately.

Posted by Allergen-Free Chef at 4:38 PM No comments:

Email ThisBlogThis!Share to TwitterShare to FacebookShare to Pinterest
Labels: Meats

Thai Rice "Crackers": a crunchy, nonallergenic way to hold up dips and spreads 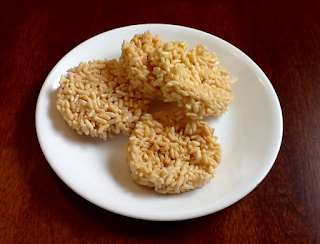 guacamole, tapenade or jelly isn't good enough. If you're allergic to corn, soy, wheat, yeast, etc., what do you hold it up with? Most tortillas, chips and breads contain at least one of those allergens. In principle rice crackers are all right, though plain ones are sometimes hard to find: most are flavored with cheese, sesame or another allergen.

I happened to discover one solution by ordering a dip with "rice crackers" in a Thai restaurant. Instead of crackers, I got delightful, crispy rounds made up of whole grains of rice. These are not to be confused with commercial "rice cakes," which are bland and boring.

These "rice crackers" are easy enough to make, although they do require advance planning.

First soak the rice in cold water for at least two hours and drain it. The next step is to cook the rice. This kind of rice needs to be steamed, not boiled, for 20-25 min. This can be done by spreading the soaked rice out on a splatter guard for frying, placing the splatter guard over a wide skilletful of boiling water and covering with an inverted mixing bowl. (For commentary on this method, go to this page.) Now spread the cooked rice out on a lightly greased surface to a thickness of 1/4" or so and cut it into rounds using a glass. (I recommend greasing the rim of the glass.) The remaining bits of rice can be lumped together and spread out again until it is all used up. Now you need to dry the rice out thoroughly.  This can be done by placing the rounds on a lightly greased cooky sheet and baking them at 200 F for a couple of hours, turning them over once. At this point you can store the rounds in the fridge until you are ready to fry them.

Preheat a layer of oil to medium high in a skillet, add the rounds to the oil and cook until they turn golden brown on the bottom.  Turn them all over and cook until they are golden on the other side also. Allow them to drain and cool for a couple of minutes.
Posted by Allergen-Free Chef at 2:08 PM No comments: