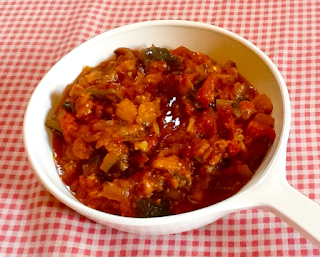 Heat a tablespoon or two of oil on low heat in a skillet or medium saucepan. Add the onion and 1/2 tsp. salt. Gently saute the onion until it is translucent and thoroughly soft. Do not brown it. Add the parsley and garlic and continue cooking for another minute or so, until they are softened but not browned.

Meanwhile peel the tomatoes. (First dip them in boiling water for 10-15 seconds to loosen the peel and then in cold water to stop them from cooking.)  Chop the tomatoes. Once the onions are ready, add the tomatoes, black pepper and paprika; bring to a simmer and let the mixture cook down until it is not overly wet, about 20 minutes, stirring occasionally.

While waiting for the tomatoes to cook down, cook the peppers on a grill or about 6 inches under a broiler, turning as needed to cook them thoroughly on all sides. The peppers should be softened up, and their peels should be brown and bubbling up. Cover with a lid and allow to cool for a few minutes. (Steam from inside the peppers will help loosen the peels.) Peel and seed the peppers, and set aside.

Put enough oil to cover the eggplant in a fryer or deep pot. Add one piece of eggplant to it. Eggplants are moist enough to foam up surprisingly high in hot oil, and you need to allow plenty of room for this.Turn on medium high heat. When the first piece of eggplant is golden brown and thoroughly soft, dredge it out.  Add the rest of the eggplant to the hot oil and cook until  it too it is golden brown and soft. Scoop the eggplant out of the oil with a slotted spoon, and spread it out on top of a plate covered with paper towels to absorb excess oil. Set aside.

When the tomatoes are ready, stir in the peppers and eggplant and simmer for a couple more minutes to allow the flavors to blend together and to bring the filling up to temperature. Adjust salt to taste.

Posted by Allergen-Free Chef at 8:19 PM No comments:

Email ThisBlogThis!Share to TwitterShare to FacebookShare to Pinterest
Labels: Chips and Dips, Vegetables

Rhubarb is tart and fruity and, if you don't add sugar to it, it's not sweet.This makes rhubarb juice a good candidate for vinaigrette. I think it's even better if you sharpen the flavor by reducing it by half.

To get rhubarb stalks to go through a juicer, you need to first pull off the tough, fibrous peels. 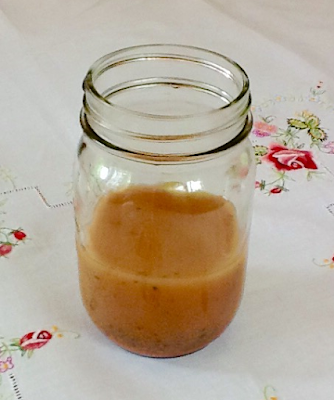 
Reduce the rhubarb juice by half (boil it until there is only 1/2 c. left). Allow to cool. Stir in all other ingredients. Shake well before using.

Posted by Allergen-Free Chef at 9:50 AM No comments:

Rhubarb is not sweet until we mix it with sugar, so there is no reason to only use it in desserts. Rhubarb juice, which has an interesting flavor and an acid content similar to that of vinegar, has all the tartness and "fruitiness" you need in a good marinade. I think it is particularly good for marinating lamb or pork. Unlike distilled white vinegar, it is not a corn product. Unlike vinegar generally, it doesn't contain traces of yeast left over from fermentation.

To get rhubarb stalks to go through a juicer, you need to first pull off the tough, fibrous peels.

Mix all ingredients together.

Posted by Allergen-Free Chef at 7:34 AM No comments: