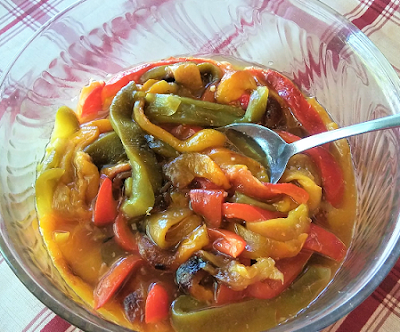 Marinated peppers are usually made with vinegar, which contains traces of yeast. White vinegar is made from corn, so it can also be a problem for someone with a corn allergy. The following recipe makes excellent marinated peppers using lemon juice and garlic.  Remember that grocery store peppers are coated with wax which may contain corn, soy or dairy products, so peel them meticulously after they're roasted.

The first step is to roast the peppers on all sides until their peels are very dark and bubbling up without overcooking the flesh. I recommend doing this on a barbecue or a few inches under a broiler. Leaving the oven door ajar can help prevent peppers from getting overcooked (because they cook entirely from direct heat rather than getting baked). Obviously this is a safety hazard, so kick any pets or small children out of the kitchen while you do this. Put the peppers on a roasting pan and place a few inches under the broiler. Keep an eye on the peppers and rotate them when the tops turn black and the peel bubbles up. Once the peppers are cooked on all sides, take them out of the oven and cover them with a lid or a damp cloth: steam from the peppers will help further loosen the peels. Once they cool down, pull off the peels, discard any seeds and slice the peppers into strips.

Meanwhile, crush the garlic cloves with a garlic press, put the crushed garlic in a large bowl with 2 tsp. of salt and pulverize thoroughly with the back of a spoon (or use a mortar and pestle if you have one).  Add the lemon juice, water and oil and stir.  Stir the sliced peppers directly into the marinating mixture.  Adjust salt to taste. Stir periodically for half an hour or so, until marinated. Refrigerate.

Posted by Allergen-Free Chef at 9:33 PM No comments:


Here is a classic, simple recipe that delivers an intense, savory flavor. This spread contains no common allergens; if you're not allergic to mushrooms or onions you should be able to enjoy it. It is good spread on bread, on canapes, on pasta, or in omelettes.

In 2 or 3 batches, place minced mushrooms in a cloth, then twist and squeeze out as much moisture as possible.  Saute the mushrooms and shallots in the oil for 6-8 minutes, until the mushroom bits have separated and browned slightly. Remove from heat and add salt and pepper to taste.


Posted by Allergen-Free Chef at 1:08 PM No comments: