Mushroom broth is delicious as a simple soup, a soup base, a gravy base or the liquid for cooking rice. The commercially available mushroom broth is actually pretty good, although not as good as homemade. It comes in packages made of paperboard covered with wax, though, and the wax may contain corn, soy or dairy products. If you're very allergic to any of those, you might want to make your own mushroom broth. It's actually pretty easy: you don't need to meticulously cut the vegetables into tiny pieces, for one thing: no one will see them in the end anyway. You can use up vegetables that were previously set aside in other recipes: mushroom stems, the top parts of leeks, parsley stems. Also, the broth is pretty forgiving: you can add celery, add more thyme, skip the carrot, or what have you, and still get good results. 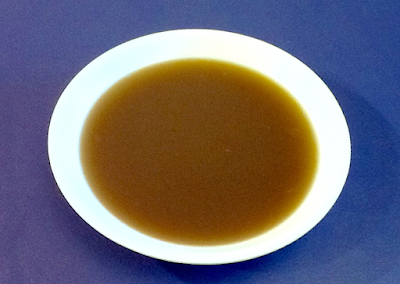 Heat the oil in a large soup pot over medium heat.  Add the carrot, leek, onion and a good sprinkle of salt, Saute gently, stirring frequently, until the veggies are softening up and the onion is translucent. Add the garlic and continue to cook until the garlic is also translucent, another minute or so. Then add the mushrooms, parsley, and thyme. Continue cooking on medium heat, stirring now and then,until the mushrooms are cooking down and releasing juice. Pour in the water, add the bay leaves and peppercorns, bring back to a boil, and simmer for an hour or a bit more. Next line a colander with a cloth and strain the broth into another large pot. Let the strained veggies cool off for a few minutes, then pick up the cloth and wring the juice out of the veggies and into the broth.
If you are using the broth immediately as soup, add salt to taste. If not, leave it alone: this allows you to reduce it inside sauces and things without making them too salty.
Posted by Allergen-Free Chef at 1:29 PM No comments: