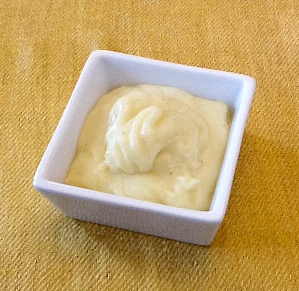 There is egg-free mayonnaise on the market, but it is generally full of soy and other allergens.  If you're allergic to eggs and soy, you may have difficulty finding any mayo you can use.  My usual response to this is to say rude things about mayonnaise. I usually dress salads with just lemon juice and olive oil, but I did come across a Depression era method for making "mayo" that was based on (cheap) potatoes rather than (pricier) eggs. Potatoes are capable of absorbing oil and emulsifying it, so this does produce a thick, creamy, slightly tart sauce that can be used in a sandwich (assuming you can find bread you're not allergic to) or as the base for a salad dressing. Stir in a small amount of extra liquid if you would like it a bit thinner.

Boil the potato until it is thoroughly soft. Smash it with a fork, and measure out half a cup of smashed potato. Put into a food-processor with all the other ingredients and process until smooth.


Posted by Allergen-Free Chef at 3:46 PM No comments: 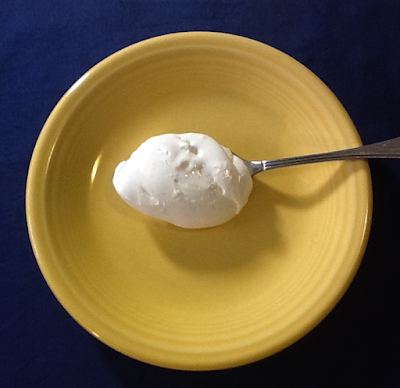 Commercially made marshmallow fluff, or marsh-mallow creme, consists largely of corn syrup. It is, however, entirely possible to make perfectly smooth, creamy marsh-mallow fluff without corn.

The recipe below is corn-free. It does contain egg, so it doesn't meet my usual specs. However,  it's difficult to make decent sweets without  wheat, dairy, corn or soy, which makes this recipe noteworthy for some of us.

What's more, an unwary cook trying to make corn-free marshmallow fluff by just leaving out the corn syrup is likely to produce a recrystallized, grainy mess. Here's how we're going to prevent that. First, we're going to use cane sugar. Cane sugar and beet sugar are both nearly pure sucrose. It's possible, though, that the slight difference in impurities is important for such a delicate procedure as candy making: many candy makers report getting better results with cane sugar. Since we're already pushing the envelope by leaving out the corn syrup, it may be wise to at least optimize our choice of sugar.

Second, the combination of adding a little lemon juice and cooking the mixture slowly on low heat allows some of the sucrose to break down into glucose and fructose, which makes it less likely that the syrup will recrystallize while you're cooking it.

Stir the first 4 ingredients together in a saucepan over low heat until the sugar is dissolved. Continue boiling, but do not stir. Wipe down the ring of sugar crystals just above the syrup with a wet pastry brush.

Meanwhile, beat the egg whites in a large bowl until they form stiff peaks.

Remove the syrup from the heat when it reaches 255 degrees Fahrenheit; use a candy thermometer.*

Gradually pour the syrup into the egg whites, while continuing to beat on high. Beat for a few minutes, until thoroughly mixed.

Store (in glass jars if you have some) and refrigerate. The fluff will stiffen somewhat in the fridge; allowing it to warm at room temperature will soften it back up.

Enjoy Life Choco Boom makes a variety of soy-free, dairy-free, nut-free, gluten-free  chocolate bars. Now if I could just come up with some wheat-free and otherwise nonallergenic graham crackers, we could make smores...

*This is the correct temperature around sea level. You need to adjust for altitude by subtracting 2 degrees for every 1000 feet above that.
Posted by Allergen-Free Chef at 3:04 PM No comments: