This soup is an example of a recipe that could be salvaged and made nonallergenic with only minor substitutions.  The original recipe called for 2 Tb. of butter to be melted in 2 Tb. of olive oil.  To make it dairy-free I simply replace the butter with extra olive oil. This doesn't hurt the flavor of the soup a bit.  To make it corn-free, I use fresh, peeled tomatoes. Canned tomatoes and tomato products usually contain citric acid made from corn and/or soy. Grocery-store tomatoes are generally coated with wax, which may contain corn, soy, or dairy products. Peeled, fresh tomatoes are the best thing to make tomato soup out of in any case. Just dunk the tomatoes in boiling water for 15 seconds, then get them into a large bowlful of cold water.  The skins will pull off easily. If you need to avoid produce treated with ethylene gas (made from corn), the tomatoes need to be "vine-ripened." 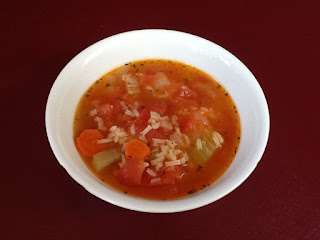 
Gently saute the celery, carrots and onion in the olive oil with a good sprinkle of salt until the onion is translucent.  Add the tomatoes, basil, salt and water and bring to a boil.  Add the rice and simmer until the rice is done. Salt to taste. 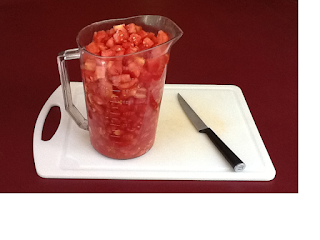 Posted by Allergen-Free Chef at 1:12 PM No comments: