Commercially made salsa usually contains corn whether you can see kernels of it or not.  Most contains citric acid (corn and/or soy) and/or distilled white vinegar (corn). If you make salsa yourself, remember that grocery store tomatoes and peppers are generally coated with a layer of wax containing corn, soy or dairy products. You can peel them following the instructions under Produce in the Glossary. On the plus side, the process of charring the peppers so that the peel blisters up gives the peppers a savory, roasted flavor that is good in salsa.


2 lb. of peppers, whatever variety you like (See Produce in the Glossary)

Prepare and peel the peppers and tomatoes as described under Produce in the Glossary. Remove the seeds from the peppers. You can seed the tomatoes too, if you like; salsa is chunky, so I don't think a few tomato seeds matter. Chop the peppers and tomatoes; put them in a pot with the garlic, cilantro, 1/2 Tb. salt and 3 Tb. lime juice. Bring to a boil; reduce to a simmer and cook, stirring occasionally, until the thickness is about right. The vegetables will have become very soft and melded together, and the salsa will have cooked down to about half of its initial volume. This will take 2-3 hours or so. Adjust salt and lime juice to taste if needed.

Posted by Allergen-Free Chef at 11:43 AM No comments: 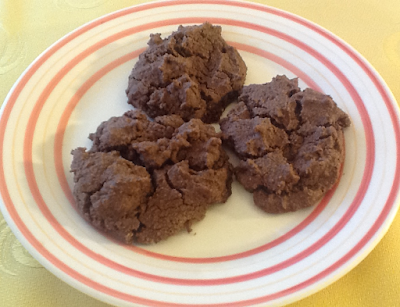 These cookies have plenty of chocolate flavor and a rather conventional texture in spite of containing no wheat, eggs, corn or soy.

Preheat oven to 350 F. Cream the sugar and shortening. Whisk in the vanilla and milk. In a small bowl, stir the dry ingredients together. Stir the dry ingredients into the shortening/sugar mixture, and mix just until blended. Scoop spoonfuls of the batter onto a greased cooky sheet and bake 10-15 minutes. These cookies are very soft when they come out of the oven: let them cool thoroughly before removing them from the cooky sheet.


Posted by Allergen-Free Chef at 2:51 PM No comments: 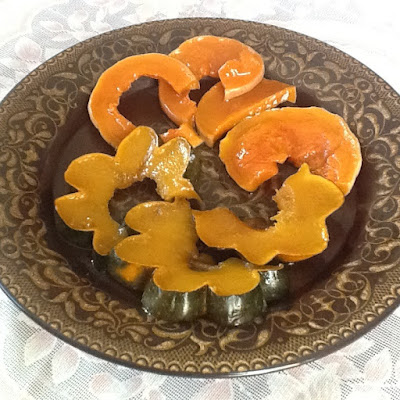 This is a classic Turkish sweet, one that is simple, colorful, tasty, and easy to make. Best of all, it does not involve the usual dessert allergens: it contains no dairy, eggs, wheat, soy or corn.

Wash the outside of the squash, and cut it in half lengthwise.  Scoop the strings and seeds out from the middle.  Cut each side of the squash into 1-inch slices. Put the slices into a wide-bottomed pot and toss them with the sugar and a sprinkle of cinnamon. Refrigerate overnight. The sugar will draw a surprising amount of liquid out of the squash. Put the pot on the stove, and bring the liquid to a boil. Reduce the heat to a simmer and cook, covered, for 10 minutes. Turn the slices over. Continue cooking until the squash is softened but not mushy (probably about another 10 minutes). Move the slices of squash to a serving dish and pour the liquid into a measuring cup. There should be 3 cups of liquid. Mix in additional water or boil off excess water, as needed. Pour the syrup over the squash and refrigerate.

The classic garnish for this sweet is chopped walnuts.  Alternatives include whipped cream, whipped coconut cream, toasted coconut, and none of the above.
Posted by Allergen-Free Chef at 3:50 PM No comments: