Needing to avoid wheat and/or yeast is a good reason to check out some other grains. Buckwheat, despite the name, is not related to wheat at all. It cooks to a texture similar to that of rice and is surprisingly tasty.

2 c. water (Use broth if you like. See Broth in the Glossary)
1 Tb. oil (See Oil in the Glossary)
1 c. untoasted buckwheat groats
salt (see Salt in the Glossary)
Heat the water to boiling; set aside. Heat the oil to medium in a small saucepan. Add the buckwheat to the oil and, stirring constantly, cook until the buckwheat looks almost dry and smells toasty. Pour the water into the pan with the buckwheat. It will splutter and boil furiously; this is normal. Turn the heat to a simmer, and add salt to taste (the amount of salt needed may vary with your choice of liquid). Cover, and cook until the water is absorbed and the buckwheat is tender. The grains should be separate and fluffy. Remove from heat and allow to set for a few minutes. Serve warm with butter (for those that can eat butter).

Posted by Allergen-Free Chef at 6:48 PM No comments:

Email ThisBlogThis!Share to TwitterShare to FacebookShare to Pinterest
Labels: Sides

Your tomato garden has been prolific and produced a bumper crop--but the weather's turned cold and you've had to pick all the green tomatoes before they could freeze. Now what?

Tomatoes can ripen sitting on a window sill or wrapped in newspaper, but cooked green tomatoes are a tart, tasty vegetable in their own right. This relish has an intense flavor but contains no common allergens, yeast or, once the pepper is peeled, corn. 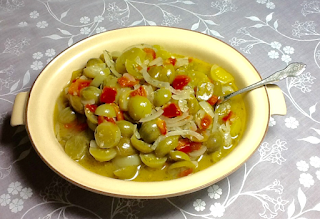 First char the pepper thoroughly on all sides, either on a grill or a few inches under a broiler. Cover and set aside to cool.

Crush the garlic in a garlic press. Put the crushed garlic on a small plate, add the salt to it and mash it thoroughly with the back of a spoon until it makes a smooth, creamy paste with no visible chunks (or use a mortar and pestle). Combine the crushed garlic with the lemon juice, oil, water and dill in a medium-sized mixing bowl.

Peel, seed and chop the pepper. Set aside.

Steam the green tomatoes until they they are tenderized but still crisp (this only takes a few minutes). Stir into the lemon juice mixture. Steam the onion just until it is turning tender (this too takes only a few minutes). Add the pepper to the steamer and give it a minute or so to heat up (it is already cooked). Stir the onion and pepper into the green tomatoes. Stir a few more times over the next half hour.  Drain.

Posted by Allergen-Free Chef at 3:55 AM No comments:

There are a variety of ways for a beef filling to be contaminated with too much corn, depending how sensitive you are to it. If you are sensitive to corn-fed beef, use grass-fed. If you react to the corn-, soy- or whey-based coatings on the packages that broth comes in, make your own broth. (See Broth in the Glossary.) If you react to the small amounts of corn added as anti-caking agents to salt and spices, see Salt and Spices in the Glossary.

Commercially prepared spice mixes, like other processed foods, are likely to contain corn products. The mixture of spices I recommend here is based on a recipe by Alton Brown.

Knead 1/3 c. cold water into the ground beef. This will help the beef to break apart better as you cook it.

Cook the ground beef on medium heat, stirring frequently and breaking it up in the pan, until it is nicely browned. Add the spice mixture, the onion mixture and the beef broth. Bring to a boil and simmer, while stirring, until the filling is heated through and somewhat thickened.
Posted by Allergen-Free Chef at 11:07 AM No comments:

Email ThisBlogThis!Share to TwitterShare to FacebookShare to Pinterest
Labels: Meats 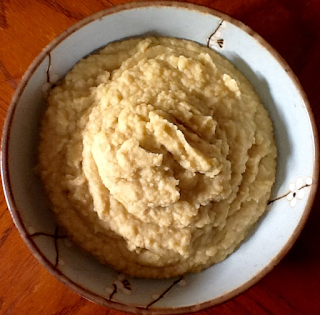 Refried beans are easy to make, and if you are allergic to beans, favas are an easy substitution. I highly recommend dry favas that have already been presoaked and peeled.

Favas are a vetch, not a true bean. Allergies to beans do not necessarily mean an allergy to favas. My grandson, who used to get sick from the amount of soy lecithin in a chocolate bar or the bit of soybean oil in a handful of candy corn, was unable to eat any kind of peas, lentils or beans. Favas, though, he could gobble with impunity.

Note that there is a rare genetic enzyme deficiency (not a true allergy) that gives some people, especially of Middle Eastern or African descent, gastrointestinal distress when they eat favas.

Boil the favas, with enough water to keep them covered, until they are soft. Drain into a bowl (i.e. retain the cooking liquid).

Meanwhile, fry the onion in the oil on medium heat until it just starts to brown. Add the garlic and cook for another minute or so, until the garlic is translucent. Add the onions to the favas and mash, adding cooking liquid in small amounts as needed, until you obtain the desired consistency. Add salt to taste and stir in a sprinkle of chili powder if you like.
Posted by Allergen-Free Chef at 10:03 AM No comments: