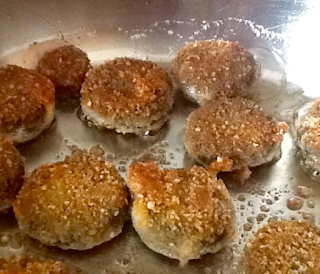 Most falafel is made with garbanzo beans. There are, however, authentic Middle Eastern recipes that rely on fava beans, and that is what we are going to use here. Favas are a vetch, not a true bean. Allergies to beans do not necessarily mean an allergy to favas. My grandson, who used to get sick from the amount of soy lecithin in a chocolate bar or the bit of soybean oil in a handful of candy corn and was unable to eat any kind of peas, lentils or beans, could gobble favas with impunity.

Note that there is a rare genetic enzyme deficiency (not a true allergy) that gives some people, especially of Middle Eastern or African descent, gastrointestinal distress when they eat favas.

salt   (See Salt in the Glossary)
2 c. soaked split favas (To soak the favas, cover them, in a large pot, with
enough water that they will remain immersed after they expand. Bring to
a boil; cover tightly and remove from heat. Wait one hour and
drain. Note that soaked favas can be kept in the freezer. You may find it
efficient to soak a large potful, portion it out into 2-cup units, and freeze.)
1 Tb. fresh squeezed lemon juice (See Juice in the Glossary)
2 Tb. chopped onion
3 cloves of garlic, sliced
1/4 c. fresh parsley leaves (See Produce in the Glossary)
2 Tb. fresh mint leaves (See Produce in the Glossary)
1 Tb. olive or other oil (See Oil in the Glossary)
2 Tb. buckwheat flour
1/4 tsp. baking soda
1/4 tsp. cayenne pepper (See Spices in the Glossary)
2 tsp. cumin seeds, toasted and ground (To toast, put the seeds in a
small pan over medium high heat. Stir constantly until they
become fragrant and start to brown. Immediately pour into a
coffee/spice grinder: they may be scorched if left sitting in the
heated pan. Grind.)
3 tsp. coriander seeds, toasted and ground (same as for cumin seeds)
flaxseed meal
oil for frying (See Oil in the Glossary)
First, make "bread crumbs" from the cereal. Pour some onto a plate, stir in a sprinkling of salt, and set aside.

Put the favas, lemon juice, chopped onion, garlic, parsley, mint, and olive oil in a food-processor and run it until they are thoroughly ground up.

Stir together the buckwheat flour, baking soda, cayenne pepper, 3/4 tsp. of salt and 2 Tb. of flaxseed meal. Mix this into the fava mixture.

Form 1/3-inch-thick patties from the fava mixture. Dip each patty into the flaxseed mixture so that it is thoroughly coated, and roll it in the "bread crumb" mixture so that it is coated with crumbs. Cover the inside of a skillet with a thin layer of oil and heat to a medium temperature. Put the patties in the oil and fry until golden brown on one side, flip, and brown the other side.  Serve with lettuce, tomato, and regular or sunflower seed tarator.


Posted by Allergen-Free Chef at 1:16 PM